When I was younger, I remember stubbornly holding on to the idea that a holiday could only be celebrated on the day as it was marked on the calendar. Luckily, I’ve let go of that rigid construct which is why when my son, Keller, called to ask whether he could travel with his best friend and his family over Christmas break, I said yes and pulled out my calendar to brainstorm alternate dates for our family celebration.  After comparing dates and obligations with Keller, my mother, my sister and her family, we settled on Jan. 5, the day before Epiphany, or Three Kings’ Day.

A minor holiday in the states, even among Christians, Three Kings’ Day is observed in many countries. The holiday celebrates the visit of the Magi and marks the 12th day of Christmas season (as in the song). It also ushers in the start of Carnival season as celebrated in several Caribbean nations and New Orleans. Traditions vary from country to country. Some of the more popular ones include:

Growing up, my family never observed the holiday. However, feeling inspired by our alternate date to our family holiday celebration, I decided to create a meal in honor of Three Kings’ Day instead of making my traditional Christmas dinner of puerco asado (roast pork). I researched food and traditional dishes associated with Three Kings’ Day. Other than variations of Three Kings cake (galette des rois in France and Belgium, A Three Kings cake in Germany, rosca de reyes in Mexico or New Orleans own king cake), I had a hard time finding any mention of dishes typically served during the holiday online, until I reached for The Frugal Gourmet Celebrates Christmas by the late Jeff Smith. Part history book, part recipe book, I have relied on it for many holiday recipes over the years. Smith, an ordained minister in the United Methodist Church, had a chapter in his book, “The Epiphany and the Three Wise Men,” offering some perspective on the observance and the three wise men, or Magi as they are described in the gospel according to Saint Matthew.

Smith makes it clear that the bible never referred to them as kings but only in later traditions were the Magi elevated to royal status. More than likely, they were scholars or astrologers following the path of the Star of Bethlehem at the request of Herod who wanted baby Jesus dead because he posed a threat to his power. After finding the manger and the miracle of the birth of Christ, the Magi returned to their respective lands without divulging the location of the Christ child to Herod.

In honor of the Magi and the Epiphany, Smith developed recipes inspired by their homeland in ancient Persia and Arabia. I selected two recipes to prepare: the rose wine—wine infused with rose jam—and Persian-style lamb meatballs served over basmati rice. To round out the menu, I would serve a green salad and make a rosca de reyes.

And then, I talked to my sister.

I had forgotten that my sister does not eat lamb—something about dissecting the muscles of a mammal at school as a teenager and coming home to find a leg of lamb in the oven that bore a resemblance to her dissected subject.

I did more research and found a recipe for a fig mole rosca for Three Kings’ Day that was filled with the mole and shredded chicken. Mole, a sauce that contains fruit, nuts and a chili pepper, and tamales are typically served during festive occasions such as the Christmas season. Rosca is Spanish for a ring-shaped bread roll. When I consulted my sister about the fig mole rosca, she agreed to it as an alternative to the lamb meatballs.

With my favorite sous chef at my side, I prepared to celebrate my first Three Kings’ Day ever. The day before our dinner, we took down the Christmas decorations as is tradition in some cultures, but mostly we did so because the tree was dying, and it was time. The morning of the dinner, I put out four pairs of shoes for my kids, niece and nephew filled with the type of small gifts and tokens that are typically found in stockings on Christmas morning. My daughter, Ilsa was a little disappointed at first. The promise of an Italian witch that swapped old shoes for new ones and filled them with gifts had captured my daughter’s imagination and the reality had not lived up to it. By the time her cousins arrived, she had come to terms with her gifts and was happy to share in the joy of the day.

My son took the lead on the mole sauce for the rosca. The night before, while we were out at dinner with friends, he praised my home cooking but confessed that he was often in doubt of most new recipes that I try. Observing that the ratio of nuts was greater than the actual chocolate in the mole mix, with my permission he added more chocolate than the recipe called for. He still was not happy with the sauce—it was still too nutty for his taste. A new challenge for 2019 emerged—make the best mole possible. 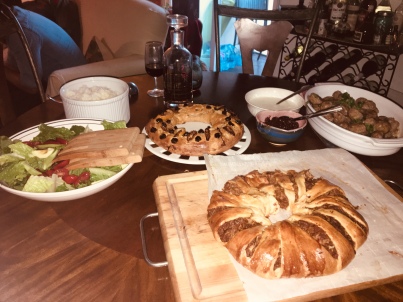 At the end of the day, with everyone satiated from food and drink, and content to be with each other, I sat down and basked in the company of my family. Any holiday, any day really, can be cause for a celebration. The celebration of Epiphany as it marks the end of the Christmas season was the perfect way to give my family the opportunity to spend time with Keller before the start of a new semester.

One thought on “A feast fit for a prince”