Growing up, my idea of barbecue—the technique by which meat is cooked in a seasoned vinegar-tomato sauce—came by way of a bottle of Kraft® Original BBQ Sauce. I know. This is heresy in parts of the U.S. where barbecue reigns big. In my parents’ efforts to acclimate to American culture, they may have taken a few short cuts or two. Kraft barbecue sauce was one way. But if I am being honest with you, I love the taste of Kraft barbecue sauce because it was the finishing sauce on my mother’s short ribs. My mother would roast the short ribs in the oven. When the ribs where just about done she would pull them from the oven, brush the barbecue sauce on them and put them under the broiler for a minute or two. The result, a tender but firm cut of meat cooked medium rare and very tasty in part because of the sauce, but also because my mom would preseason the ribs as well. I love eating short ribs from the bone directly.

In the late ‘80s, early ‘90s, Red, Hot & Blue served the first authentic barbecue that I can remember. Made famous in part by the late Lee Atwater, a republican strategist and former Republican National Committee chairman, who was one of the owners of the restaurant, Red, Hot & Blue offered Memphis-style barbecue. Memphis-style barbecue traditionally makes use of pork ribs and shoulder and is slow cooked in a pit. The flavor comes by way of a dry rub applied to the meat before cooking or a wet sauce applied as the meat is cooking.  My husband and I had frequented the restaurant a handful of times before I came down with a nasty stomach bug that put me off barbecue for a long, long time.

It was not until I started traveling for the American Society of Civil Engineers in the late ‘90s that I rediscovered barbecue in Nashville. And just like that, it felt silly to avoid barbecue. I am an unabashedly lover of all meats. Barbecue was just another way of cooking meat and I was missing out for no good reason other than an association with a stomach bug.

In the years that followed I started adding barbecue back into my dining rotations. I returned to Red, Hot & Blue, since there was an outpost minutes from my home in Alexandria, Va. Later, when a Famous Dave’s Barbecue opened near me, I started going there somewhat regularly for carryout during the work week. (Their “Feast for Two” which was perfect for a family of three was a bargain.)

Business travel has taken me to Kansas City on many occasions where I’ve come to appreciate Kansas-style barbecue at Oklahoma Joe’s (now Joe’s Kansas City Bar-B-Que). Located in a small corner of a gas station, this walk-up counter establishment was named one of the “13 places to dine at before you die” by the late Anthony Bourdain. I am not sure I would have made such a declaration myself, but it was such an achievable bucket list item, how could I resist. Lately, I’ve enjoyed Hill Country Barbecue, Urban Bar-B-Que and Black Hog BBQ.

A few weekends ago my bestie Wendy suggested that we attend the Giant® National Capital Barbecue Battle. The event sponsor is a client of her partner Dan’s though this event is not under his purview. The event has been a Washington institution for years, but I had never gone because barbecue was not a strong favorite of mine. But like most food activities in my life, it was an opportunity to hang out with my friends on the rare, leisurely Saturday afternoon.

The event is divided into different sections including samples from local and national manufacturers, barbecue for sale from restaurants and professional pit masters and a variety of barbecue competitions including the Top Military Chef competition, the National Pork Board National Pork Championship and the Giant® National Barbecue Championship Cooking Contest. We did not make it to any of the competitive events, but we did sample some of the barbecue for sale. The three of us selected three different vendors to make our purchases from and agreed to share with each other. Dan purchased a pulled pork sandwich from MacBrand Foods, a festival concession stand operator. The pulled pork sandwich, cooked in a vinegar-based sauce, was quite tasty. Wendy and I independently decided to purchase a pulled pork sandwich and pork ribs from our chosen vendors—Ribbins BBQ based in Chambersburg, Pa. and The Tender Rib located in Morningside, Md. near Andrews Airforce Base. Both pork sandwiches were quite good, though Ribbins edged out the Tender Rib—which touted its award-winning North Carolina-style pulled pork—just a smidge because of the sauce, which was on the spicy side. However, Ribbins’ pork ribs blew The Tender Rib right out of the flames. Ribbins’ pork was tender and slightly fatty, in a good, flavorful way, while The Tender Rib’s pork ribs were a little dry.

I was curious to know more about Ribbins BBQ and its self-styled Southern barbecue north of the Mason-Dixon line. According to Google Maps, Ribbins was a mere two-hours’ drive north. Since the drive to Chambersburg would take me right past my friend Paul’s home in Frederick, Md., I invited him along to join me and Ilsa on my quest to get barbecue. It turned out to be a great distraction for Paul who, like me, is in the midst of his own “uncoupling”, however his is far less amicable than mine has been, to put it politely. Having shared a meal with him at Black Hog BBQ, I knew he would appreciate a good plate of ribs served up along a roadside stand. We made it to Ribbins, which occupies space in a parking lot along historic Lincoln Highway, mid-afternoon on a Sunday. While traffic was surprisingly heavy, even for a summer weekend, I had made good time arriving in just over two hours. 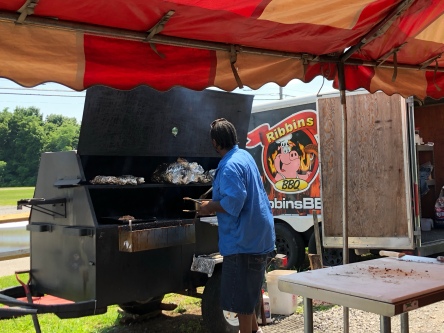 The dedication with which the pit masters cook the meats is especially impressive on a 90+°F day. I chatted a bit with Alex, the owners’ son, who was overseeing the stand and the barbecue that afternoon. Founded in 1994, Ribbins’ stand operates only on the weekends, when there’s not a major festival that they are participating in. However, do not worry if you pull up one weekend day to find that their grills are cold. Ribbins offers their sauce—an elixir of 28 ingredients—for sale. When I mentioned that I had been at the Giant® National Capital Barbecue Battle the week before and I wanted more of their ribs and pulled pork, Alex and his team seemed impressed that someone would travel so far for outstanding barbecue. 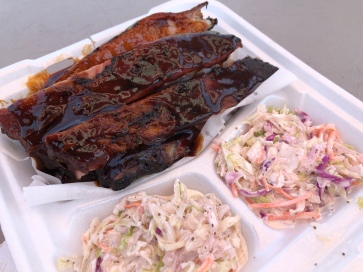 And boy, did they not disappoint. The ribs were just as flavorful as they had been the week before, even without the added sauce of which we had the spicy variety that Wendy had seasoned her ribs and pulled pork with, and a sweeter version. Alex confirmed that the ribs had been seasoned with a dry rub prior to adding the wet sauce while cooking. Paul ordered the pulled pork sandwich, which was also as tender as I had remembered it. We each complemented our entrees with coleslaw, giving us the semblance of a vegetable to accompany our barbecues. The only drawback was the weather itself. The oppressively hot day curbed my appetite from clearing my Styrofoam box of ribs, but then I wouldn’t have the leftovers too relive the first time I tasted Ribbins BBQ.

If you get the urge to plan your own spontaneous road trip to feast on Ribbins BBQ, you’ll need to set your GPS to North Wildwood, NJ the weekend of July 13 when Ribbins will be at the Anglesea Blues Festival. In September, they will be at the Great Frederick Fair. To keep up with Ribbins BBQ, follow them on Facebook.

According to several sources including Merriam-Webster Dictionary and the Grammarist, the widely proper spelling is barbecue, with a “c”. The spelling with a “q” is typically found in restaurants and names of products. As for the abbreviations, that feels like a personal choice. Mine would be BBQ. One thing I did learn was the origin of barbecue stems from barbacoa, the Spanish word for a Caribbean cooking technique for meats. To paraphrase the dad in My Big Fat Greek Wedding “Give me a word, any word, and I will show you that the root of that word is Spanish.”

2 thoughts on “You Say Barbeque, I Say Barbecue”