Perhaps no other food captures the essence of Spanish culture better than tapas. Small enough for a person to make a meal out of two to three dishes, tapas are meant to be shared, evident of the social and generous nature of Spaniards. Tapas originated in the Andalusia region of Spain in the nineteenth century where the first tapas were slices of cheese and meat served atop a glass of sherry to protect the drink from flies or dust. Eventually tapas evolved to be somewhere between bar food and cocktail fare, served in small portions to accompany beer or wine and grazed upon throughout the evening.

The first time I went to a tapas restaurant was in the early nineties when José Andrés’ first restaurant, Jaleo, opened in the Penn Quarter neighborhood in Washington, D.C. At that time all I knew of Spanish cuisine was paella and sangria—and only recently have I learned the true origins of paella. Jaleo was one of the first restaurants in the area, and possibly in the US, to introduce the concept of tapas to American diners.

In the years since, Andrés has built a restaurant empire that includes Oyamel, a nuevo Mexican restaurant; Zatinya, a celebration of Turkish, Greek and Lebanese food; and American Eats Tavern, Andrés’ interpretation of American food. Nearly all his restaurants have been lauded for his creativity and interpretation of various cuisines, with his masterpiece being the minibar, surely inspired by his training at elBulli, a legendary Spanish restaurant renowned for its genre-breaking haute cuisine. When you have a passion for food and possess a singular talent, it’s easy to work across a broad spectrum of different cuisines.

A few weeks ago, I had the chance to try another tapas restaurant, Estadio, with my good friend Wendy. Owned by the same group that owns Proof, Estadio’s creative team includes executive chef Rufino Bautista, a native of El Salvador, and Max Kueller, wine director and son of the late owner Mark Kueller. The restaurant is a testament that with great passion for food and skill, nearly any cuisine could be mastered. Like Jaleo, Estadio has appeared in a number of the region’s best restaurant lists, even ranking a few slots higher than Jaleo. While the restaurant may not have the pedigree of a Spaniard chef at the helm, its menu reflects the best of traditional Spanish tapas with some tasty reinterpretations. 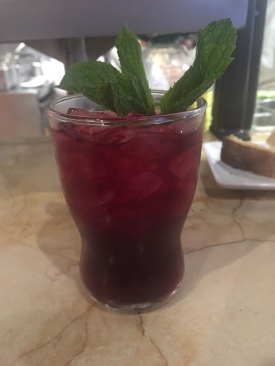 Wendy arrived first and scored seats at the chef’s table which overlooks the kitchen where the sous chefs work. I arrived shortly and immediately ordered a sangria made of red wine and cachaça, (also known as aguardente, the most popular alcoholic beverage in Brazil) lime and mint. Traditional sangria is made of red wine, triple sec and/or brandy and fresh fruit. Estadio’s sangria was small, mighty like the gymnast Dominique Dawes, and packed quite a punch.

When we got down to the business of ordering our meals, we each took turns selecting our items from the menu. Wendy and I are both obsessed with cheese so for our first course we selected three—Idiazábal, a traditional, farmhouse, hard cheese made from raw milk of a Latxa or Carranza sheep in the Basque and Navarra regions of northern Spain; San Simon, a popular smoked Spanish cheese made from cow’s milk in the region of Galicia; and Valdeón, a semi-soft blue cheese from León.

From there we selected a few items each from the rest of the menu. I selected the foie gras scrambled eggs with black truffle butter; the seared foie gras with apple memelada (marmalade), vincotto—a sweet paste made of red grapes—and grilled bread; and bomba rice with wild mushrooms, truffle butter and manchego. Wendy ordered the sautéed pea shoots with olive oil and sea salt, and the Rhode Island calamari a la plancha with salsa verde.

Foie gras is not typically found in Spanish cuisine but I happen to have a weakness for it, as well as eggs and truffle. The combination was completely decadent. Even Wendy, who hates foie gras, found the dish “indulgent and delicious.” The second foie gras dish was clearly a Mediterranean take on a classic French dish of foie gras aux pommes (apples). The vincotto with apple marmalade added just the right amount of sweetness, nothing too cloyingly. Wendy passed on this tapas because the foie gras was the main attraction of this particular dish, where in the previous one, foie gras was more of an accent to the eggs. The rice dish was perhaps the most authentic of the Spanish tapas that I ordered that night. Bomba rice, which is typically used in paella because it absorbs far more liquid compared to other short grain rice, had an exceptionally creamy texture similar to risotto, thanks to the amount of butter and chesse in the dish. The texture was underscored by an earthiness that could only be from the wild mushrooms and the truffle in the butter.

In an effort to stick to her diet, Wendy selected the lone vegetable tapas dish among our selections, sautéed pea shoots—the young plantings produced by peas—with olive oil and sea salt. Wendy and I had not seen pea shoots on a menu before. From what I’ve learned of pea shoots, I would expect them to be found on a Californian cuisine menu than at a tapas restaurant. The simplicity of the dish relies on the olive oil and salt to enhance the natural flavor of the pea shoots.

While seafood is a big part of Spanish culture, the team at Estadio decided to do its own take of Rhode Island-style calamari—fried calamari garnished with slices of pepper. Instead of frying the calamari, the chefs at Estadio seared the calamari on a round, flat griddle, sealing in its natural flavors. Like Rhode Island  calamari, Estadio’s calamari were served with sliced peppers, but instead of a garlicky or marinara sauce, Bautista paired the calamari with salsa verde, a nod to his Central American heritage.

It may not be obvious, but what makes Estadio true to the Spanish culture it celebrates is the willingness to experiment and reinvent familiar dishes. While it remains a distant cousin to Jaleo and to its founder simply because it does not push the boundaries of experimentation at the same level, Estadio provides an incredibly satisfying and exceptional experience to Spanish tapas that draws people in because of the familiarity of its dishes that meld Spanish cuisine with other culinary influences.