If your grandmother, mother or auntie ever told you that the favorite pie that she makes for every family gathering is made with love, that might be a load of bull, at least if it’s a recipe she originated or was trying to perfect. When I set out to make my guava swirl cheesecake, I thought it would be a fun way to honor my father by re-conceptualizing a dessert he loved. And while I’ve enjoyed the experience for the most part—especially the positive reviews on how it tastes—there have been moments of frustration and disappointment, especially when the first few versions did not come out as I would have liked.  But I have finely achieved a version of this cheesecake that I am pleased with, and it feels victorious—in the same way that a prizefighter stands over the opponent he just delivered a TKO to.

So how many versions did I go through? I made seven cheesecakes over a period of two months. That’s a lot of calories consumed and time at the gym to burn off the excess weight. Being a newbie to recipe creation, at least the official documentation of a tested recipe, I was curious as to how many times the average recipe is tested before going to publication. According to Tina Ujlaki, former executive editor of Food & Wine and recipe editor for culinary luminaries including Julia Child, Jacques Pépin and Lidia Bastianich, it’s not unusual for a professional to test their recipes multiple times. Publications like Bon Appétit or Serious Eats employ test kitchen staff to ensure the integrity of a recipe.

When I first made versions 1.0 and 2.0 of the cheesecake, the crust was perfect but the filling was too creamy, almost undercooked, as reported on my Sept. 16 post, “Guava Swirl Cheesecake: What in the Swirl?” Some of the later versions came out of the oven with the top surface cracked, perhaps from overcooking.

To get what I considered to be the perfect cheesecake, I implemented all the tweaks that I had listed out in the post throughout my multiple versions including:

After the sixth or seventh version, I was pretty confident that I had nailed the recipe. The taste was never in question, but, I did want it to have a certain consistency and a beautiful swirl pattern going throughout the cheesecake, and I think I achieved that.

So someday, when I am a little old Latina grandmother, and my children and grandchildren ask me what’s in my cheesecake, I might be gracious and tell them it was made with love and leave it at that. Or I might regale them with stories of how I strove for perfection with this cheesecake. But more than likely, I will point them to this blog, assuming that blogs or web-based technologies are not obsolete. 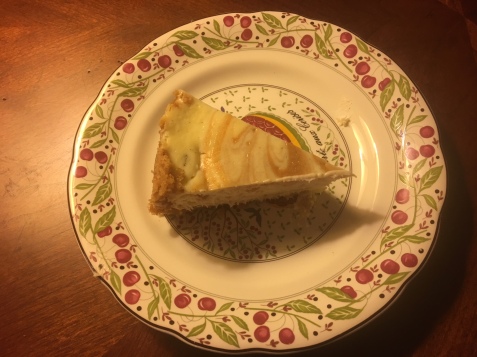 One stick (8 tablespoons) of butter melted

To make the crust

To make the filling