The hardest part about testing a recipe when you’re living alone is the loss of a built-in audience. Luckily, I have a number of friends, family and even co-workers who I can solicit their honest feedback on my latest creation.

Of my most trusted friends is Wendy. Our friendship spans nearly 30 years when we first pledged Alpha Phi Omega, a coed service fraternity, and has taken us through marriage, child rearing, loss and reinvention. Of the many commonalities we have, a love of food and cooking is at the top. From our college-era meals at Bennigan’s to event dining at Jose Andres’ Minibar (back when it was two seatings of six per night at the now closed Café Atlantico) to the many Thanksgivings we would spend collaborating on meals and themes for our week-long observance, we’ve enjoyed and created many meals together. So this past Saturday I made the trek around the Beltway to enjoy an evening with her and her partner Dan, and to test my Guava Swirl Cheesecake creation, which I opted to make in her beautiful kitchen.

Yes, it seems that I am still exploring ways to honor my father’s love of guava and cream cheese by creating recipes that I might enjoy more than the way he and many other Cubans have done so for generations. Creating isn’t really the right word. It’s more reconceptualizing a dish, which I know cooks more talented and resourceful than I have done already. But of course the fun for me is working through this creative process till I make something all my own.

Before I did any research into the key ingredients for a cheesecake, I did go to the Bestway Mercado to look for the guava pulp that my mom had clued me in on previously when I was making my Guava-Cheese Puffs, and for a Hispanic cookie that would make a good substitution for graham crackers. I stumbled upon the Maria cookies, which are manufactured by a number of companies. I went with the ones produced by Goya® because of pure brand loyalty.

Now, I’ve never had or heard of a Maria cookie until this weekend, when I sampled one the morning I was prepping to make the cheesecake. The cookies were light and crisp—I could see myself going through a whole sleeve of this delicacy. When I gave one to Wendy to try, she mentioned that they reminded her of animal crackers in taste, which I thought was a good comparison. I am not sure how I went this long without ever having one—the cookies themselves took up a lot shelf space in the Bestway cookie aisle. I was even more amazed when I discovered through a little online research that they are British in origin. The Maria cookie was first created in 1874 to commemorate the marriage of the Grand Duchess Maria Alexandrovna of Russia to the Duke of Edinburgh. So how did these very British of cookies become a favored Hispanic product? During the Spanish Civil War bakers found themselves with a surplus of wheat flour which they used to bake Maria cookies. It’s not just the Spanish-speaking nations that love them; they are among the most popular cookies internationally consumed in nations in all major continents.

Having gathered most of the required ingredients for the cheesecake, I started researching recipes from Ruth Riechel’s Gourmet Anthology, Julia Child’s Baking with Julia, Better Homes and Garden New Cook Book, Pillsbury’s Best of the Bake-off Cookbook. Most of the recipes called for three 8-oz packs of cream cheese, sugar, vanilla and four to six eggs. Some called for a bit of flour or milk. Some called for sour cream, either mixed in with the filling batter or, as per Ruth’s instructions, on top of the cheesecake after it has been baked for a while. I decided to go without the flour, milk or sour cream and keep the filling to the cream cheese, sugar, vanilla and eggs (and of course, the guava). I also wanted to achieve a marble swirl of the guava throughout the cake, so you could pick out the distinct flavors with each bite.

I patterned my crust after Ruth’s recipe, except her crust recipe only covered the bottom and about an inch up the side of the pan. I prefer a complete crust surrounding the entire perimeter of the cheesecake, so I crushed an entire sleeve of the Maria cookies with ¾ cups of turbinado sugar, cinnamon, a pinch of salt and a stick of melted butter. The crust was perfect. The filling fell a little short.

As I cut into the cheesecake the following morning for breakfast*, I could see that I did not achieve the swirls that I had hoped for. Also it was still a little moist in the middle. Wendy did not seem concerned with the texture—she prefers a creamy one while I was hoping to achieve a firmer consistency. Per Ruth’s instruction, the cheesecake was done when it was lightly brown on top and had some jiggle to it at the center, which mine did. But I was not entirely happy with the texture and the lack of swirl, something that I’ve achieved with similar recipes in the past. The taste was pretty good though. So at this point I will be in the tweaking phase for this recipe. 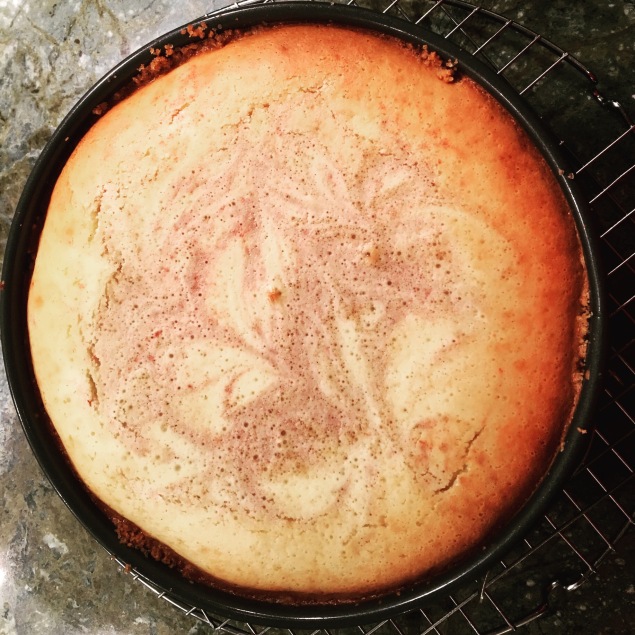 The top crust was fine.

Crust was near perfection.

What did I do wrong?

My Guava Swirl Cheesecake was not the only casualty of the night. As I was working on my dessert, Wendy and Dan prepared a spectacular meal of roasted veggies; mozzarella, tomatoes and fresh basil drizzled with olive oil and balsamic vinaigrette; and brick oven-style pizza baked on their grill. However, Wendy also prepared a homemade rosemary focaccia for later in the week. Unfortunately she became distracted from the food, wine, cigars and conversation, forgetting her bread in the oven. As far I was concerned, all was not lost; I encouraged her to consider using the hardened bread to make bread salad or bread soup—both Italian dishes that traditionally make use of stale bread. She got really creative however and made a savory bread pudding with her focaccia that, by her estimation, requires a food pairing to still be determined.

So on a late summer night, among good friends, enjoying a meal, a drink and a smoke, we each made our mistakes in the kitchen; briefly lamented the error and what could have been; regrouped and decided what we can do better for next time. Much like we’ve done throughout all areas of our lives. And on this we’ve built the basis for our friendship.

*Yes breakfast. Don’t judge. Once cheesecake is cooled, it needs to be refrigerated for several hours. Breakfast was the first chance we had to sample the cheesecake.

One thought on “Sometimes You Have to Break a Few Eggs”